*THE* forum for active Trojan Boaters...

This forum is for comments and the exchange of information relating to Trojan Boats and boating. Please do not post used parts or boats For Sale in this area. For general, non-boating topics please use our "General Discussions" section.

Note: Negative or inflammatory postings will not be tolerated.

Hello> I am new to the site but I am hoping to get some advise on shipping 32T from Kentucky to Nashville. I am hearing conflicting reports that yes you can and then no and then, yes you can but you have to take the bridge off. Trying to close on a boat on Monday and this might be a deal breaker for me. Any comment, suggestions or services that I can call to try and find realistic prices. Would be very much appreciated. Thank you / Stephen
Top

I moved your post to the Trojan Boats Forum . I will let the experts answer But I am pretty sure the bridge has to come off . The boat hauler should know the max height of the route .
Moderator

Last year, I had my F32 Invictus shipped from Norfolk, VA to Memphis, TN by Brothers Marine Transport in your area. They had to remove the flybridge. They didn't wrap it during shipment, so it was filthy dirty. There are areas with new caulk that I can't remove from their reassembly. Otherwise they were fast and efficient. Everything worked fine when it reached the Mississippi.
Top

Yes and get qualified people with guarantees, my flybridge was removed and reassembled, poorly, things do not work, be careful.
Season is short, we make the best of it.
Top

the F32 is listed as 12'6 clearance/ 2'6 draft= 15ft, I think the highway limit is 13ft. I had my tricabin shipped from the jersey side of the delaware river to CT. That giant windshield had to come off. Cost 2600., was not allowed on I95, made the guy drive a crazy route to get it here. All kinds of wacky rules they have to follow. He did a great job.
Top

You may not need to remove the whole bridge, all I needed to do was remove the wind deflector (see on fwd deck), remove steering wheel and the shifters. NOTE the console within the bridge is higher than bridge surround so you would gain a couple more inches by laying that down within the bridge surround, **leaving console up while removing the surround does not in fact save you any height.** You can see the console sticking above the surround in picture even from this low viewpoint.
I am in Ontario so our rules might allow a bit more height, setting it on a lowboy should make all the difference. 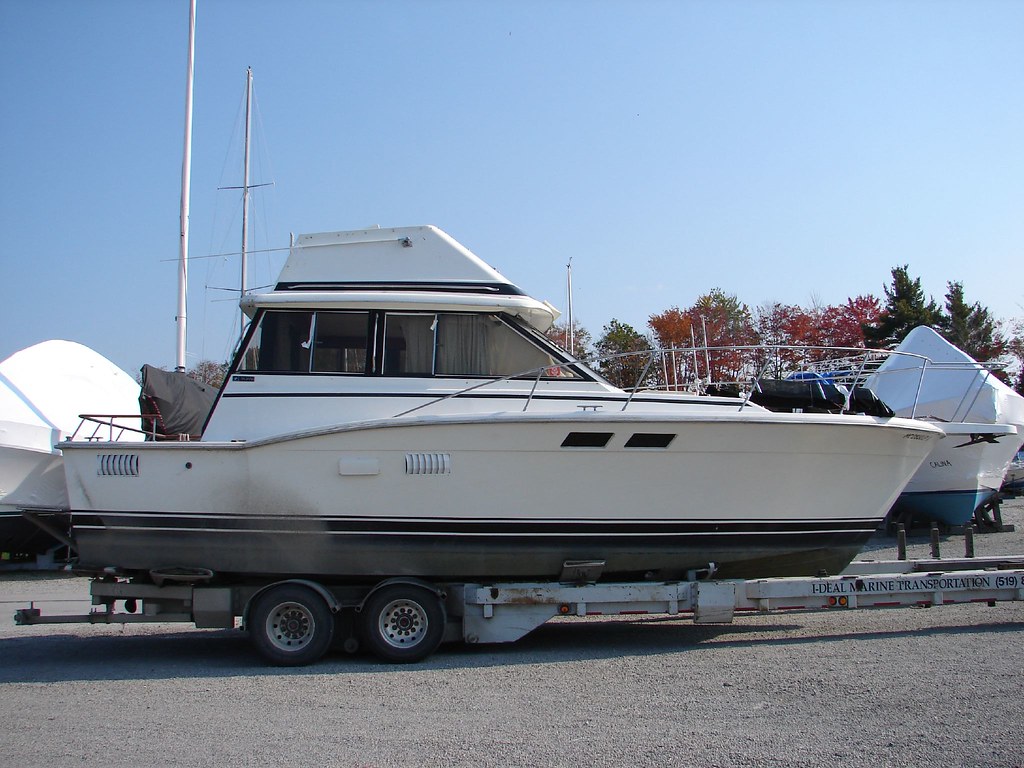 Here it is with surround removed for painting! 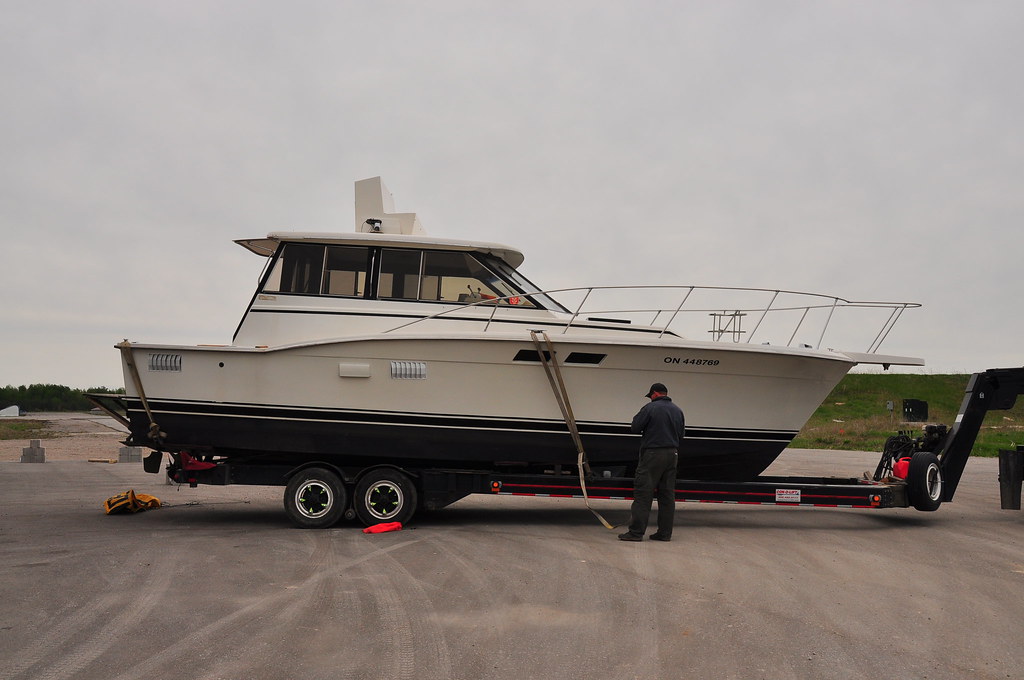 I just had my F-32 shipped from Lake Norman, NC to Myrtle Beach, SC on a lowboy trailer without removing the flybridge. Oversized permits
were needed ($125.00) & the department of transportation (DOT) told of which route had to be taken. I received quotes ranging from $3,200 -
$3,700 for removing the bridge for transporting to $1,525 with the bridge intact for a 197 mi. trip.

where in kentucky are you? is there any chance of bringing to nashville on the water? even its a longer trip it could be very fun. i moved my boat almost 500 river miles after buying and used this as a great vacation. just a thought.
1997 CARVER 405
"the BLACK PEARL"