The Trojan Wars
The Story of a Gutsy Boat Builder

Unfortunately, Trojan was slow to recognize the shift from wood to fiberglass construction. "Jim McQueen never liked fiberglass. He thought it was a fad," said Larry Warner. By the middle of the '60s the company still had not begun to build in fiberglass, or, for that matter, aluminum or steel. When it did, Trojan turned to a local company making bathtubs to turn out the early fiberglass hulls.

Still, the middle 1960s were roller coaster years, with the Whittaker Corporation of Los Angeles taking over Trojan, who shortly afterwards acquired Shepherd Boats in Canada. The deal gave Trojan access to Canadian and British Commonwealth markets. The move also gave Trojan a luxury 52-footer that soon found favor with American buyers. In 1966, Trojan made an aggressive bid to get into the European market, shipping 24 models across the Atlantic for boat shows in England, France, Germany, Italy and Spain. 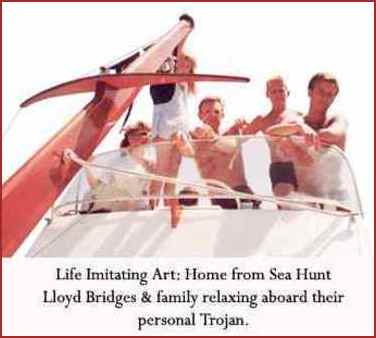 At home millions of TV viewers were already familiar with Trojan's 33-foot Express Cruiser seen in the Sea Hunt series, starring Lloyd Bridges as Mike Nelson, a Navy ex-frogman. The series used a cutaway model for interior shots as well. Bridges liked the boat so much, he bought one for his personal use.

However, the company's initial reluctance to accept fiberglass as the way of the future, and a misunderstanding of the publics boating tastes which chose the greatly reduced maintenance of the the new technology, marked a turning point. Eventually, gone were the smells of sawdust, paint and varnish, to be replaced by resins, epoxies, molds and composites. Gone, too, were the off-the-wall antics such as Jim McQueen sighting the shear or chine line by spreading his legs and looking backwards through them at the upturned wooden hulls on the production line.

By the late '60s Trojan was playing catch-up in an industry that had abandoned wood for fiberglass in the mass production of recreational boats. Only the die-hard traditionalists and custom builders stayed with wood.

"The number one problem Trojan always had was not enough money. They were growing faster than resources could support," said Larry Warner. Moreover, while they sold thousands of boats, they still couldn't compete with Chris-Craft when it came to buying materials in volume.

A succession of new owners arrived and departed as if through a revolving door, each with a solution of how to become viable. After Whittaker came Invest Corp., followed by Bertram, who launched the Bertram Trojan International series in the late 1980s. Next came Genmar Holdings, Inc., who paired the Trojan name with Carver, one of Genmars many boat-producing companies. In 1992, Genmar closed the Lancaster plant and moved the production line to Wisconsin.

Larry Warner was offered a job with Carver in the mid-west. Instead, together with John Leed he founded Marine Tech, a company that bought Trojan's Lancaster inventory to supply parts for Trojans, which included the wood era. They set up shop in rented space in a corner of a pipe organ repair factory in Columbia, Pa., a few miles west of Lancaster. Besides propeller shafts and struts etc., they inherited what company archives survived. This included some financial records, boat serial numbers, photos and other memorabilia of the wood construction days. Note: Beacon Marine Supply and Marine Tech have formed an alliance and proudly distribute what remains of the original Trojan inventory.

While the name Trojan still endures in the aerodynamically shaped fiberglass hulls that are the fashion in the new millennium, it is with nostalgia that owners of wooden Trojans remember this gutsy, upstart company; its founding fathers had a dream and made it come true with a boat that was both winsome and rugged. Of the trio of Jim McQueen, Ernie Warner and Harper Hull, only Hull is now left, an energetic 78-year old still living in Lancaster.

Yet, for all three of these remarkable men, their legacy lives on in the memory of anyone who has ever seen their wooden Trojans cruising on blue seas under sunny skies.

Page 3 / 3
←
Brian Nolan is a Canadian author who usually writes on politics and military affairs.
He divides his time between a home in Ottawa and a pied-a-terre in the south of France.