It's hard to believe these days, but in the early 1980s most boat builders were still building power boats that had evolved only slightly from the early days of fiberglass boat building in the 1960s. In those days plugs were typically built of wood and curves were few and not much more than you could bend into some thin plywood. In other words, most power boats were pretty boxy. That is why when drawings of the Trojan's radical new 10 Meter express appeared in a spring 1980 issue of Boating magazine many American boat builders gasped. A couple actually called the magazine's editorial offices complaining that touting such a design "as the wave of the future" would only make their squared off boats obsolete, and, by the way, they were canceling their advertising. As the saying goes, the rest was history. If you would like to find an old boat that is cheap to buy but has contemporary styling, the place to start looking is with the Trojan 10 Meter. Dozens of them are on the market from $18k to $40k. 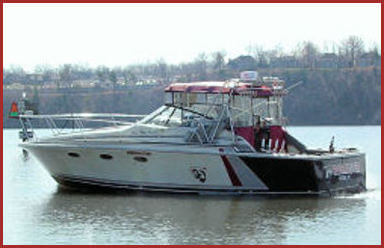 The 1980 Trojan 10 Meter with Harry Schoell's European styling both topside and below.
There are a lot more things to commend the Trojan 10 Meter beyond the fact that you can pick one up cheaply. At 13' - the boat was relatively beamy for its day, and its Schoell-designed "Delta Conic" hull has proved itself over the years repeatedly on different models and different brands. It is stable and rides well. Designer-inventor Schoell has always been known for being on the cutting edge of development.

Harry Schoell today -- 30 years after he designed the 10 Meter

Trend Setter
Below, the 10 Meter layout and design were right out of Star Trek, and its round sliding doors to cabins and heads were the first to be seen in the industry on this side of the Atlantic. The ample beam permitted this 32'6" boat to have more room below than virtually anything on the market in its class at the time. For example, the more traditional early 1980s 34 Sea Ray express design had an 11'11" beam and weighed 11,400 lbs.

At first boaters either loved the new 10 Meter design or hated it, and that is why Trojan continued building the old F-Series for a number of years. But as time went on, the number of Harry Schoell "Meter" models grew, and the F-Series models were discontinued one by one. After a few years, Trojan was building many more boats than the far more famous and prestigious Bertram, a sister brand, also owned by the Whittaker Corp. (And it was making more money, too.)

Hundreds of Trojan Meter Boats Were Built
As you can see in the lead pictures for this article, at least a few owners of these boats think they make great fishing boats, and they do because of their huge cockpits and stability. But they also make good cruising boats because of their room both below and on deck, their sea-keeping abilities, and their good ride.

Most of the Trojan 10 Meters were powered with twin gas engines, with 330-hp 454 blocks being a popular option. But at 12,500+ lbs. the 10 Meter really needed the torque that only diesel engines could provide. Trouble was back in the early '80s few buyers wanted to spring for the heavy and expensive diesels. And in those days Americans really didn't consider diesels until they got into boats in the high 30s or low 40s.

Luxury Tax Strikes Again
Just about the time that a good diesel option came along in the form of lightweight Yanmar engines in the 1990s, Trojan had been devastated by the 10% Luxury Tax, was sold and lost its way in the competitive world of boat building. Today its name is only a memory to the old salts. But there are dozens of these great old boats still floating quite happily and as everyone knows, fiberglass is virtually indestructible.

Smart boaters looking to get into a good 32' boat inexpensively will search for a Trojan 10 Meter with a good interior and two lumps of rust in the engine room, something that should not be too hard to find. Once a deal is made, then re-powering with the diesel engines that should have been in the boat all along will turn one of these boats into a fine offshore yacht.

Yanmar Re-power
When it comes to re-power, as we have said before, no brand takes better care of its customers than Yanmar. Re-powering is a major aspect of the company's marine business and its distributors know their business, are equipped with both the manpower and the experience to hold an owner's hand through the re-powering experience, and their prices are usually as good as they get.

We think that twin Yanmar 4BY-180 180-hp diesels are an ideal choice for a Trojan 10 Meter re-power project. One could put larger diesels in the boat, but speed was never this vessel's strong suit. And, after all, this boat is a vintage craft being re-powered, so it is wise to keep costs low. We would play to the boat's strengths - good sea-keeping stability, room and comfort. The small diesels give her respectable speed and tremendous range for cruising or fishing.

The Cost, All Up
The folks at Mack Boring, the Yanmar master distributor in New Jersey, did a re-power job on a Trojan 10 Meter a few years ago, so we asked them for the cost today, and what their performance numbers were on their 10 Meter re-power. They installed twin 4LH DTE, 170-hp Yanmar diesel engines. Since the installation a few years ago, Yanmar has superseded this engine with the common-rail 4BY-180, which has 10 more horsepower.

Mack Boring's spokesman told us that they can sell a customer a pair of Yanmar 4YB180s, pull out the old engines, install the new diesels, and do all of the needed plumbing and electrical finishing for about $56,000, total.

That means if you can pick up a 10 Meter for, say, $30,000, for a total of $86k ($30k + $56k) you can have a great riding hull, beautiful topsides that are as modern-looking as anything on the water, and one that runs economically at reasonable cruising speeds, and has great range. And then there is the reliability and safety of diesel power.

Thankfully, before Mack Boring yanked out the old 454s and turned them into mooring anchors its engineers ran speed trials on the boat. Below are the speeds that they reported, which is on the high side of what this boat generally is credited with doing. Take a look at the used boat listings and you will see that most say the boat goes 18 to 26 mph, with only a few claiming a WOT of 28 mph. This gas-powered boat had a reduction of 1.5:1 and was swinging 16x15 props.


Based on the numbers above we would say that best cruise is at 3000 rpm, going 18 mph, getting .72 mpg for a range of 162 statute miles. After the Yanmars had been installed, the engineers at Mack Boring took the same boat out and ran speed trials again. This time the reduction gear was 2.07:1 and the engines were turning 20 x 22 props. Note that the torque and gearing of the Yanmar diesels permitted props that were 25% greater in diameter with 47% more pitch. It is here that the boat gets its incredible jump in fuel economy and range. Just look -

While the best range is at 2400 rpm going 15 mph, we suspect most people would run the boat at 20 mph, which still gives the boat a range of 346 statute miles or over twice the range of the gas-powered boat going slightly slower. These ranges mean that the 10 Meter is ably suited for going out to the canyons, fishing a long day and coming back with plenty of reserve. Or, a family can easily cruise to Nassau or the Abacos or most other places in the Bahamas on a tank of fuel.

For more information about re-powering and how much it costs, contact Yanmar

Reprinted with permission from BoatTEST.com, LLC