Reprinted with permission Motor Boating and Sailing – May 1981


There isn’t much question that the new Trojan International 10 Meter was the most talked about powerboat at the 1981 Miami Boat Show in February. Not only is she the most radical boat Trojan has ever produced, but she represents a whole new school of thinking in bottom design, and in structure. Her promoters bill her as the greatest gift to boating since the advent of fiberglass. Her detractors say other things: "She’s so fat she’s gotta be a pig"; "That bottom has got to pound"; "Those flat chines will slap you silly"; "There’s nothing new about her."

Well, they are welcome to their opinions even if they couldn’t be more wrong. While it can be truthfully said that no boat is perfect, I will also make the flat statement that the 10 Meter is the best riding, best handling, and most efficient planning hull to appear in many years. And the reason for this combination of qualities is called the DeltaConic – a bottom concept developed by Harry Schoell that was new and different enough a couple of years ago for the taste of the U.S. Patent bonded, and bolted together.

Other engineering details include: access panels to every part of the boat’s inner workings and hidden mechanisms; centralized and instantly accessible panels for the electrical systems; Schoell’s patented exhaust system that puts the exhaust into the water along the sides of the boat where it will be carried away instead of blowing back into the cockpit; space age control console that hinges open quickly for access to the wiring; molded-in air conditioning ducts to provide even cooling throughout the boat; specially developed port lights that open with a quarter turn of the fasteners, yet are leak-proof when closed, and push button interior doors for the head and forward stateroom.

These last were the favorite toy of the Miami Boat Show and the doors on the display boat were probably operated more than 10 years of normal service. The instant question about them was: What do you do when they won’t work? The answer is just as quick: Push them open by hand. The electrical drive is designed to be over-ridden if needed. 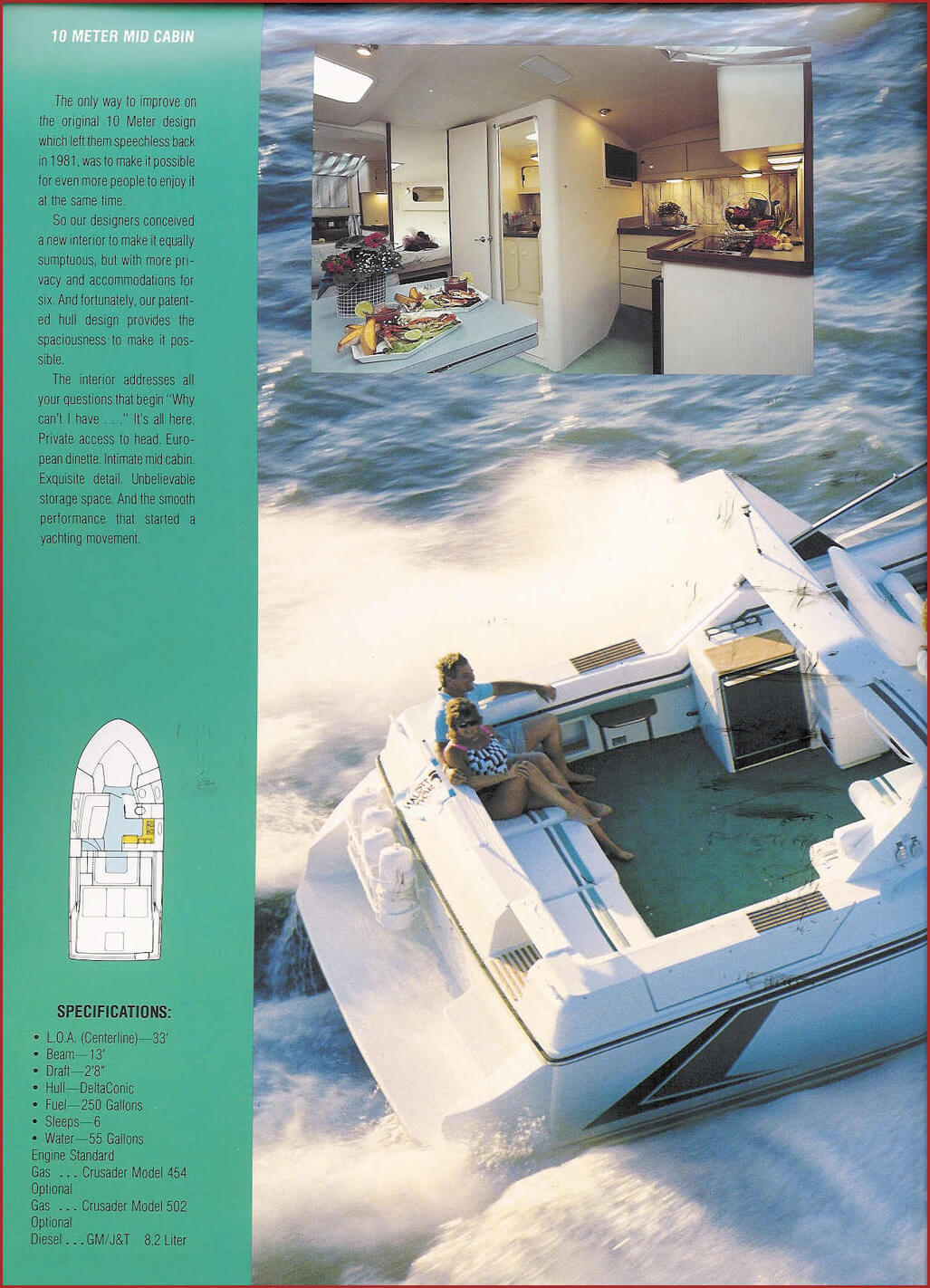 They are the final fillip in luxury aboard a boat whose interior was created to be opulent and luxurious. In a total departure, Trojan abandoned the traditional and went to brushed aluminum, wine-red Formica, and silver-gray soft look fabrics throughout. Underneath the new look, however, lurks a standard six-berth arrangement with convertible dinette, a settee that converts into upper and lower berths, double berth stateroom forward, galley aft to port, with head to starboard.

The head is huge for a 33-ft boat, and is all molded for strength and to make it easy to keep clean. An outstanding feature is the stainless towel rack that doubles as a handrail for use in a seaway.

The galley is also very complete for a small boat. A new idea is the alcohol stove with an electric cook-top. Also new is the trash container hidden under the center of the L-shaped counter. The remainder is given over to storage for dishes and bottles, toaster oven, optional microwave and under-counter refrigerator.

All in all, very workable arrangement, as ought to be expected from a company that has been building cruisers for 30 years.

But the interior arrangement is about the only thing that betrays the boat’s heritage of family cruiser building. Trojans historically have been commodious livable boats that ran with reasonable efficiency (in wooden boat days they were very efficient), and acceptable comfort in quiet waters. They were not designed, nor were they noted for handling the great, rough waters of a transatlantic crossing. To a boat, the hull was of the modified-V design, with definite compromises between accommodations and sea-keeping ability.

The 10-Meter is a total departure, and is one fine Trojan with truly outstanding sea-keeping ability. Consider this: We took her out the first Sunday after her arrival in Florida. It was only her fourth day in the water and the second time she’d been in the ocean. The wind was honking out of the northeast at 20 to 30 knots and the Gulf Stream was near its worst. Seas were eight feet or better, with the top two or three feet frequently falling off as breakers. It was a thoroughly mean and nasty day. We went through the inlet at a conservative 2,700 rpm and then, as our courage stiffened, we winched the throttles up until we were highballing over, around and across the seas at 3,500 rpm or about 28 mph. We were airborne quite often. At no time did I feel threatened by a loss of control. At no time did we take more than spray aboard (and not very much of that), and at no time did the boat smash into a wave with the teeth loosening jar one might expect. Nor, did the chines slap or pound. Upwind or down, she handled positively. Her directional stability is uncanny. We let go of the wheel for periods that were quite extended under the circumstances and Schoell later reported running halfway to Miami (over 10 miles) without ever touching the wheel.

But, her most incredible quality is stability. Whereas deep-V will roll until you can barely stand up, the DeltaConic rolls hardly at all. To prove the point, we went dead in the water with great rolling and breaking seas on the beam. I stood in the cockpit with my feet together expecting momentarily to be thrown for a loss. Several minutes later, as the boat went up one wave and down the next, I was still standing without once having to reach for support. Amazing, truly amazing.

This quality, according to Schoell, comes from the boat’s forward end having a different rolling period than the stern. This transforms the desire to roll into a pitching motion. As the boat begins to roll, you can feel the stern lift, meet resistance and then give up the attempt. The result is a weirdly stable platform in the midst of a heaving sea.

The role of the boat’s incredibly wide beam of 13 feet in promoting stability is mixed. It plays a role, of course, but not as large as might be imagined. Wide boats with flat bottoms tend to have jerky rolls. Since much of the 10-Meter’s beam is in the wide chines that are often above the water, this jerkiness or quick rolling is subdued, with most of the stability coming, as mentioned, from the double axis of the boat.

Critics also made the statement that a boat this fat would be hard to push, and that would be so if it were all in the water. Since the chines just kiss the water at rest and rise above it on planning, the actual boat that runs in the water is much narrower and more easily driven. In fact, advancing the throttles and watching her slide up on a plane with hardly any hump is a joy.

And, once on a plane, the boat surely runs. Due partly to light weight of 12,000 pounds, and partly to the inherent efficiency of the DeltaConic, the boat topped out at 32.8 mph, while 3,000 cruising rpms produced 23.5 mph. This efficiency carries over to displacement speeds as well with the boat achieving 9.3 mph at 1,500 rpm using 5.6 gph.

Power installed in the test boat was a pair of 270-hp Cursaders. Trojan also offers a bewildering array of options ranging upwards from a pair of Mer-Cruiser 470’s (140 hp each). Although no boat has yet been built with these tiny power plants, Schoell predicts a top speed of close to 26 mph with them.

If that speed is achieved, Schoell and Trojan have indeed scored an outstanding accomplishment. Even if that mark is missed, the boat, as it stands, is accomplishment enough.

Perhaps the largest accomplishment is Don Seith’s, who somehow managed to convince the brass at Whittaker, the conglomerate of which Trojan is a division, that it was right and proper to abandon what they had been doing for thirty years and strike out boldly and expansively in a totally new direction.

The International 10-Meter is the first result of that new direction. Others will surely follow since, as of the close of the Miami Show, dealers had placed enough orders for every boat to be built this model year.