Lancaster That Was:
This 1963 Trojan Boat fast-pitch softball team was
among many great ones in the Lancaster area

It wasn’t too many years ago that Lancaster County had some of the best fast-pitch softball teams anywhere. There were the top-notch Armstrong industrial teams of the 1930s and 1940s and some stellar Hamilton Watch squads of the same era. Then there was this 1963 Trojan Boat fast-pitch softball team, which won the “A” division of the Lancaster Industrial League that year.

The squad was led by the pitching of Wilbur Witman. Witman “was up with some of the best pitchers going,” recalls Lancaster County baseball historian Barry Giberson of New Providence. Witman, like a lot of the other top fast-pitch hurlers, could really “bring it,” or throw fast, Giberson notes. And since a softball pitcher throws from 46 feet compared to baseball’s 60 feet, 6 inches, “that makes it a lot harder to hit,” Giberson says. 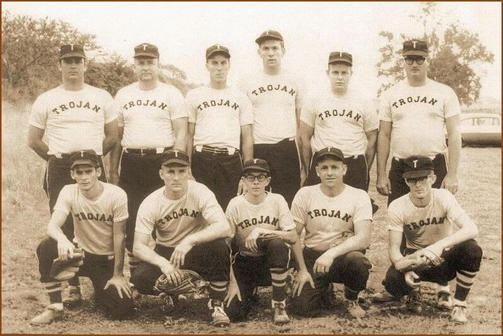