US Patent # -- 4193370
PDF of the original Patent
Planing boat hull
A planing boat hull having a conical contour extending from the bow portion to the stern for a distance equal to substantially one-third the length of the hull at the keel and two-thirds or more at the chine, the after section of the hull consisting of a flat surface on each side of the keel maintaining a constant dead rise angle of 12 to 18 degrees extending to the wide lipped chine, and a chine lip portion extending at the same angle as the dead rise but in a reverse direction.

2. Description of the Prior Art
The present planing boat hulls are of the V-type construction. These hulls have an arcuate contour extending on either side of the keel from the bow to the stern which effect good riding characteristics to the boat when planing, when moving in the direction of a head or following sea and at a speed for which the hull is designed. When a planing boat having a conventional V-hull is not planing or when moving along a quartering sea, its lateral stability is very poor and high impacts of the hull are experienced as the speed of the planing hull is increased. Also, the bow of the boat tends to ride at an increasing angle thereby increasing the impacts of the hull. Since the water flowing past the boat follows the shape of the hull, the spray created by the forwardly moving boat tends to spray in the direction of the occupants of the boat. The present invention intends to avoid the above indicated poor characteristics of the conventional V-type hulls for planing boats by providing a hull that is partially arcuate and partially flat whose stern is provided with an appropriate dead rise and chines extending about the outer edges of the hull of substantially equal but oppositely extending angle as the dead rise.

Summary of the Invention
Therefore, a principal object of the present invention is to provide a hull for a planing boat whose contour is partially arcuate, namely the surface of a cone, and partially flat thereby increasing its lateral stability at non-planing speeds.

With these and other object in view, the invention will be best understood from a consideration of the following detailed description taken in connection with the accompanying drawings forming a part of this specification, with the understanding, however, that the invention is not confined to any strict conformity with the showing of the drawings but may be changed or modified so long as such changes or modifications mark no material departure from the salient features of the invention as expressed in the appended claims. 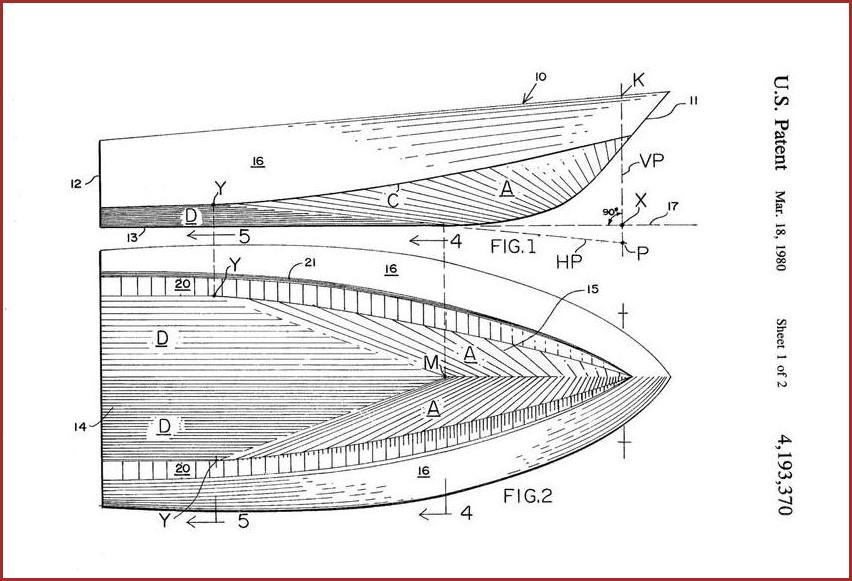 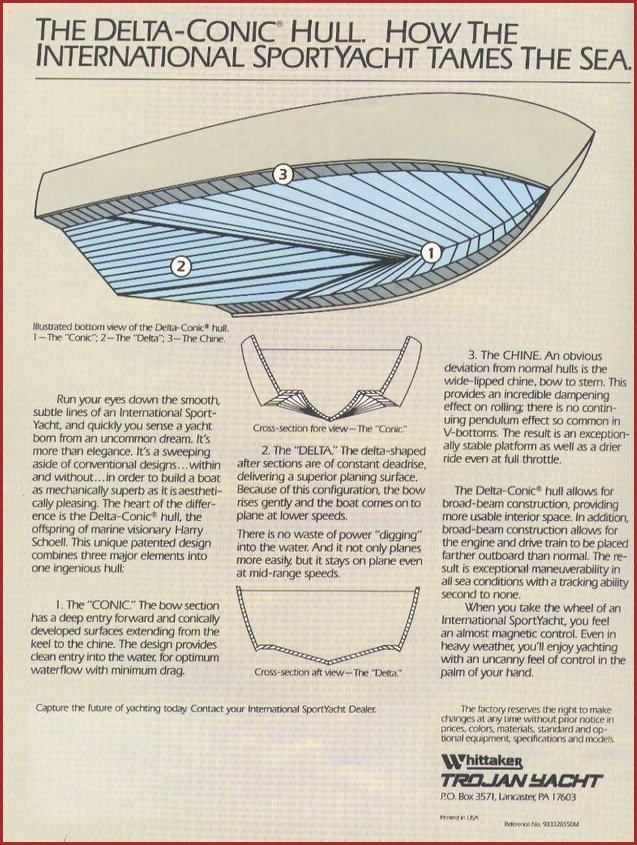