Offshore pleasure boat and family cruiser
The best of both worlds

By Bob Stearns // Boating Magazine
Trojan has done quite nicely with their wide-bodied, sumptuous Ten Meter, thank you. And now for an encore - the new Nine Meter Sport Express. The concept: an International Sporting Boat, with muscle and styling flash, but with enough accommodations for comfortable family cruising. Nearly the same result: a success, but on a smaller and perhaps less striking scale.

The boat we were testing, one cool day in February, was the production prototype - just a few days out of Trojan's booth at the Miami International Boat Show. The hour meters showed only six each on the twin Crusader 350's.

"We just hauled her out of the show, put on the props, and dropped her into the water," said Trojan's Chief Engineer, Ron Pickle. "She hasn't been plugged into any tests yet."

Performance Plus
Previous testing or no, there were no uncertainties about this boat's performance. On the test course, she managed a top speed of 38.92 mph, hardly sluggish for a boat with a dry weight of 11,000 lbs. Estimated fuel gallonage aboard: 120. Plus four adults and the usual test hardware.

South Biscayne Bay was restless and aggravatingly choppy, the result of 25 to 30 mph southwest winds and an opposing tidal flow. Heading first directly into the three to four foot seas, then turning 180 deg to rush down-sea (both at nearly full throttle), I quickly learned that this beamy express cruiser wasn't about to be shoved around. There was no pounding, no slam-bam, no rattle of structural components below decks. Just a good, solid, comfortable ride. There was a slight tendency to lean into the wind, a situation typical of deep-V and modified-V hulls that can only be corrected with remote trim tabs (which Trojan was not considering as an option at the time we tested).

Building Beef
According to Larry Warner, Trojan's Design Engineering Supervisor, what contributes significantly to the 9 Meter's solid feel and riding comfort is perhaps one of the most unusual construction systems in the industry. The inner liner is entirely one piece, from stem to stern, with most of the major components molded right into it. These include the stringers, engine beds, a 40-gallon water tank, the bases for both the dinette seats and th V-berth (which is almost a full-size double bed) in the bow, the galley top, the shower sump, and even the special shells for the muffler boxes that vent the exhaust gases through the chines aft along the waterline, instead of straight back through the transom pipes in the usual manner.

This full liner is carefully fitted into the hull while the hull is still in the mold. All of the contact points between the hull and the liner are bonded with a special resin paste, and a partial vacuum is pulled between the hull and the liner until the paste is completely cured (about four hours). The result is an exceptionally rugged, unitized hull/liner combination wherein the strength and rigidity of each reinforces the other.

This combination of unitized construction and designer Harry Schoell's DeltaConic hull is tough to beat. The shape of Schoell's hull incorporates developed conical sections that proceed from the bow approximately one-third of the way aft along the keel and two-thirds of the way aft along the chines. From the transom forward, and gradually blending into the forward conical contours, is the "Delta" portion, a modified-V after-body with only 14 degrees of dead-rise at the transom. As this dead-rise carries toward the bow, it gradually increases to approximately 19 degrees, thus providing a sharp entry. Added to all the above are exceptionally wide chine flats (almost 20% of the total hull width), which creates a large amount of dynamic lift as speed and all the stability you would ever need even with no way on in a beam sea. A truly sea-kindly boat.

Working Station
As cockpits and interiors go, the Trojan 9 Meter is definitely designed for those who prefer the outdoors to the indoors. The helm on this model is completely out in the open, although for inclement weather there are several optional canvas sets that range from a convertible top, which spans the opening between the windshield and the optional radar arch, to a full set that includes a drop curtain from the aft end of the radar arch to the cockpit sole.

As you would expect, visibility from the helm is completely unobstructed in all directions. The helm and companion seats can be mounted atop optional boxes that provide stowage space, thus affording the helmsman excellent elevation for the best possible visibility. The instrument panel is generous, with more than adequate space for the necessary gauges (all of which are easily seen and read) that go with twin engines, either gas or diesel.

The cockpit is exceptionally roomy for a boat that's only 29'4" overall. Enough space for three or four couples to lounge comfortably. The electrical system is against the port side inwale next to the companion seat, and has circuit breakers instead of fuses.

There is also an optional full-length bench seat, capable of seating five or six adults, across the transom. But, in the event you want to use the cockpit for casual fishing, the thumbscrews that anchor this bench seat to the cockpit sole can be removed without tools, and the seat left on the dock.

Below the cockpit sole is a surprising amount of space. More than enough to house the two large Crusader gas engines V-8's and the 6.5-kW Onan generator in the test boat. Even with two big diesel engines (like the optional J&T 8.2 liter V-8's) and a diesel generator, there would almost be enough space left over to build a low-headroom shop and workbench down there. Certainly more extra stowage space than you'd ever need.

Access to these spaces is via three large hatches directly above the engines. When all three are lifted it would possible to pull either or both engines without removing any additional portion of the cockpit sole. Another large hatch abaft the engines provides access to stowage and the generator. An 18-inch swim platform comes standard with the boat, and for good reason. The platform is actually an extension of the boat's bottom, though not quite as wide as the full transom section. Molded into the bottom of this platform are pockets for the propellers, which extend abaft the transom itself. The rudders are also mounted on the underside of the platform, for access to their posts and gear. This whole configuration allows the engines to be located about 18" further aft than they otherwise would be - a big difference where the cabin space is concerned.

Interior Volume
Because this almost 30-footer is designed to have an abundant amount of of open cockpit space, the space inside the cabin is somewhat limited and perhaps a bit cramped for the four adults she is designed to accommodate. Still, the space that is available is used wisely. Besides the "double-bed" V-berth/lounge in the bow, which has a privacy curtain between it and the dinette/galley area, there's a head compartment on the starboard side that features a sink/vanity and a stand-up shower.

As is customary, the dinette, which is located on the port side across from the galley, also converts into a double berth. All the available space beneath the berths and the counters is properly used for stowage as it should be. There's even a hanging locker in a panel behind the circular companionway steps.

The galley comes with an electric refrigerator and an alcohol/electric stove as standard equipment, and a surprising amount of both stowage and counter space.

The interior finish of the cabin isn't fancy, but it is tastefully and functionally done with quality plastic laminate and aluminum trim. Clean, and appropriately European in style. A skylight/hatch over the galley makes working there a lot more pleasant than it is on small cruisers I've seen. 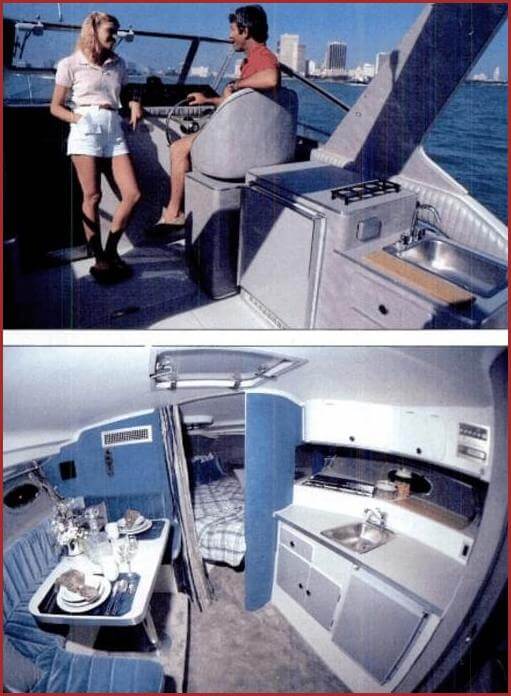 Performance
The pair of 350-hp Crusader gas engines in the test boat yielded optimum cruising speed and mgp (at planing speeds) at 3000 rpm, which was 26.18 mph and 1.13 mpg. That would make her maximum calm-water cruising range on a full tank of 185 gallons in the neighborhood of 209 miles (note that our official figures drop that by some 10% to allow for unusable tank volume). Not impressive, but with all of the cubic space beneath the cockpit sole, it would be possible to add more tankage. Expensive, maybe - but something to consider if you're planning some boondocks cruising.

At the time we were testing this newest addition to the Trojan fleet, the only available power systems were the twin Crusader 350's, or the twin Crusader 270's. Now, however, Trojan has added the larger DDA/J&T 8.2-liter four-stroke diesels (at 270 hp) and twin Volvo Penta TAMD 40s to the options list. Based on other boats I've tested with twin Crusader 270 gas engines, I would expect performance with them to be very satisfactory; with slightly lower initial cost. Performance with the Detroits should be sparkling (albeit expensive on the down-stroke), and perhaps less so with the Volvo's (at 165 hp each).

The test boat was fitted with quite a few extras - enough to raise her from the base price of $74,000 to a total list price of $102,045. In addition to those I've already mentioned are a LED-equipped temperature-controlled air conditioner with reverse-cycle heating, a stereo cassette deck, depth sounder, removable wet bar with ice-maker, teak covering boards, bow rail with pulpit, hot-water system, and much, much more.

According to Ron Pickle and Larry Warner, a flying-bridge version of the 9 Meter is already in the design stages, and will be forthcoming in the near future.

As an all-around family cruiser, all of us at Boating like the new Trojan. She has enough flashy styling and almost enough performance (especially with the 350s) to qualify her as a sport type, and enough cruising potential to please most any small family. While much of her rather healthy price is hidden deep within her in the form of sophisticated engineering, she stills shows enough class to the outside world to inspire admiration. And that's not hard to take.