IN THEIR WORDS
Canadian Richard Tanguay and his family live along the St. Lawrence River, one of Canada's best-known cruising grounds, dotted with islands, rimmed with evergreen forests, and teeming with wildlife. After owning several boats ranging from a small fishing boat to a 30-footer, Tanguay believes he's found the perfect cruising boat - and at a price that fits his budget.

It's a Trojan F-28 sedan, a vintage 1976 cabin boat he's turned into a floating summer cottage capable of taking the family and friends out for an evening, a weekend or a week.

"We take our vacations on the boat, usually for a trip of two weeks and more than 400 miles," says Tanguay, a 45-year-old self-employed accountant who is married with two children.

It's seaworthy, reliable, homey and sleeps the family of four in comfort. And like any good summer cottage, it can handle a crowd, even an unexpected one, with comfortable quarters. "With this boat I still have elbow room when relatives or friends come on board," he says.

Take the fly-bridge, says Tanguay. It's big enough to seat a crowd. And he's able to turn the cockpit into a patio - literally. "I have a [patio] table and four chairs that I can set up for dinner on the hook or at the dock," he says. "It's the best place to sit around in the evenings and relax together. But there's so much room that the people who come by in their express boats look at us with envious eyes."

Tanguay bought the Trojan in fall 2002 for $21,000 (U.S.). Ruggedly built, the boat was still in sound shape, according to the survey, though there was some cosmetic work to do inside the then 26-year-old boat. "With the money you save [with a used boat], you can afford to fix things up the way you want them," Tanguay says. "And there might be some left over to take care of those unexpected things that come up."

Tanguay saved even more money by doing much of the interior over himself, and he says he enjoyed the work. "I did most of it last spring when the weather got warm, and I used all the best-quality materials," he says. "Now we have all of the amenities we need: CD, microwave, hot water, alcohol stove, you name it. It helps, with a used boat, if you can do some things yourself."

The Trojan is powered by a pair of Ford 351 gas engines, and Tanguay cruises the 28-footer at about 2,500 rpm, which gives him a 17-mph speed. He'll push it to 3,000 rpm (26 mph) as needed, but that's not where it likes to stay, he says. "The engines run well, don't burn oil, start in seconds, and the sound is great," he says. "The downside is that they're thirsty. Maybe fresh engines would be better, but for me it's only a matter of $200 or $300 difference over a season [in fuel costs]. At that rate, it would take a long time to pay for a repower."

With all the new boats on the market to choose from, what made Tanguay go the used route? The same reason many others go to the classifieds and the Internet rather than the showroom: "I bought a used boat because you can find really good deals for a fraction of the cost of a new one," he says. "And in a new or old boat, the pleasure of boating itself is the same."

WALKTHROUGH
The Trojan F-28 Sedan has a 1970s look, with an upright profile, large windows and snub-nosed fore deck. The bow is moderately flared, the sheer nearly flat, and there's ample freeboard carried aft. The large fly-bridge is ladder-accessible and protected by a full wing on both sides, extending to the aft end of the deck.

A substantial beam (12 feet, 3 inches) for its 23-foot, 11-inch waterline length gives the boat plenty of interior volume, which is well used. Few 28-footers can match the sedan's lower helm station, for instance. The boat rides a conservative (12 degrees of dead-rise) modified-vee hull, which, with the ample beam, presents an adequate planing surface. V-drives were used to save space, and the twin engines are placed just forward of the transom and accessible through two large deck hatches. Original engines were 225-hp Chrysler inboards for a cruising speed of around 20 to 22 mph, and a top end of close to 30 mph. The approximately 7,700- pound vessel carried a modest 100 gallons of fuel; an optional additional 50-gallon tank later became available.

There's little unused room in the Trojan's family-friendly interior layout. A pair of forward berths make up the master cabin, which can be closed off from the rest of the boat. It's adjacent to the compact head, located to starboard and equipped with marine head, shower and sink.

In the salon, the helm station is to starboard, equipped with a destroyer wheel and an instrument panel/navigation station. The galley-up is to port, and standard gear originally comprised a two-burner stove, under-counter refrigerator, sink and shelf, and storage space.

Most of the salon is taken up with the L-shaped dinette, placed to starboard, which converts to a berth for two. There's a sofa to port, which doubles as a berth for one. In a pinch the boat could sleep up to seven.

AVAILABILITY
Relatively few F-28s were built during the boat's four-year production run (1976 through 1979). But a quick Web search still turned up more than a handful of the F-28s, spread from New England to the Carolinas, the Great Lakes and the Pacific Northwest. Prices were less than $30,000. Here are a few examples. A 1976 model with twin 225-hp inboards, hot-and-cold pressure water, electric/alcohol stove, microwave and fridge, basic electronics, and a television for $26,000 in Florida; a similarly equipped 1978 model for $24,500 in North Carolina; a souped-up 1978 with a power upgrade to V-8 Fords (318 hp each), canvas package, full galley, and shore power for the TV/VCR for just more than $29,000 in Oregon; and a fishing version with twin V-8 Fords, a 140-gallon fuel supply, Interphase finder and more for $23,900 in New Jersey.

BACKGROUND
The history of Trojan is more like the history of many companies, adapting to - and sometimes setting - trends in recreational boating. The modern company grew out of a small Troy, N.Y., wooden-boat shop in the 1950s. Two young boat builders, Jim McQueen and Harper Hull, bought the company and relocated to Pennsylvania, where their Amish work force soon turned out a small wooden cruiser called Sea Breeze. An appreciative audience getting over the Korean conflict snapped it up, to the tune of nearly 1,000 boats. Later, a wooden 31-footer came out, and it sold enough units to turn Trojan into the third-largest boat builder in the world during the 1960s. A Trojan was featured in the top-rated television show "Sea Hunt," starring Lloyd Bridges. Purchased by the Whittaker Corp. in 1969, Trojan made the move to fiberglass construction and established a name in that market with a series of popular cabin cruisers and express boats. The recession and luxury tax of the late '80s and early '90s caused the company to stop building boats for a short time. Carver Yachts picked up the brand in 1991 and ramped up production with the Trojan 370 in 1993. Carver meanwhile was bought by Genmar Holdings - which owns 16 brands, including Wellcraft, Glastron and Hydra-Sports - and built several Trojan models until 2002. The Trojan name is currently owned by Genmar, though it isn't building boats under that brand. 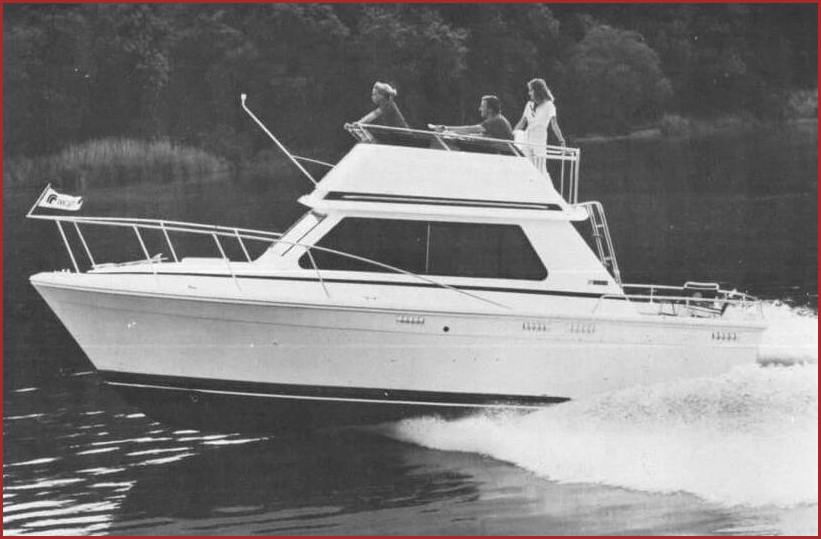